Jaadoo (جادو) is an Urdu-speaking bug and the sixth character in The Lingo Show, He is a Pakistani bug who has appeared first in Chop Chop. But has major appearance in Jaadoo's Obstacle Spectacle .

Jaadoo is a green and white striped bug, riding his yellow unicycle. He has four small arms, and is a bit fat. His unicycle is all yellow.

He can ride his unicycle, juggle, and play the Pakistani sport called cricket (which is very similar to baseball but with a flat bat). 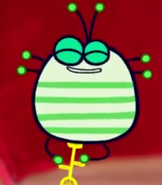 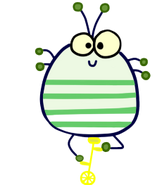 Retrieved from "https://the-lingo-show.fandom.com/wiki/Jaadoo?oldid=11142"
Community content is available under CC-BY-SA unless otherwise noted.