Jargonaise is a French bug and the second character that has first appeared in Chop Chop. But has major appearance in Can't Can't.

Jargonaise is a bug who loves to paint, dance, and eat cake, assuming that she has a sweet tooth.

She has feather-like wings, and antennae that resemble a disco ball. She has a head band, big eyes and a small body with sparkles that she wears. She has teeth coming out of her mouth, and has four legs.

She can dance the can-can, do a limbo act, swing on a trapeze, and paint pictures. 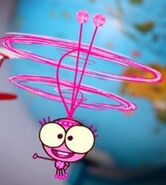 This is how Jargonaise flies in this episode called Trapeasy Rider.

Retrieved from "https://the-lingo-show.fandom.com/wiki/Jargonaise?oldid=11182"
Community content is available under CC-BY-SA unless otherwise noted.