His own guitar
Tricks
Castanets

Queso is a Spanish bug and the third character in The Lingo Show who has appeared first in Chop Chop and his major appearance in Questanets.

Queso is a cockroach with swirly antenna. His body is all orange, except his wings. He has a yellow guitar to carry, and his wings are purple.

He can dance and play his guitar in the show. He also makes a pretty good clown, and he's also really strong! 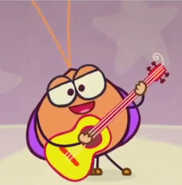 Retrieved from "https://the-lingo-show.fandom.com/wiki/Queso?oldid=11092"
Community content is available under CC-BY-SA unless otherwise noted.