Wèi (卫) is a Mandarin, Chinese-speaking ant and the first character in The Lingo Show who has appeared first in Chop Chop.

Wei is daring, energetic, and always looking for something fun and exciting to do in the Big Bug Shows.

Wei is a small winged ant with a crash helmet. His favorite color is blue. His body has red-yellow stripes, and has a Chinese character in the middle of a helmet, and he wears four roller skates.

He can skate, and chop things with his bare hands. He can be electrified and his roller skates can help him to go very fast. 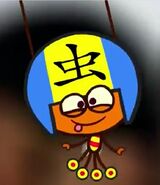 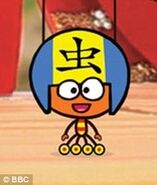 Retrieved from "https://the-lingo-show.fandom.com/wiki/W%C3%A8i?oldid=11184"
Community content is available under CC-BY-SA unless otherwise noted.